"Of Water" is a conceptual dance film and love letter to the beauty of water. It was created on location in and around the Smith River, California's only remaining free-flowing river from source to sea. The river is embodied by 9-yr-old poet Rhiannon Hewitt, who also composed two poems for the film. The first speaks from the river’s point of view about the relationship between water and a forest. The second contemplates how the river sees humans’ relationship to it. Rhiannon is a passionate climate activist with a deep lover for water and a history of public performances of her environmentally-aware poetry.
Lauren Godla choreographed and performed a series of dances that take her character through an exploration of her relationship with the environment. These begin with confronting her fear and desire for camouflage, move into joy and release, then into surrender to the River’s current, where she meets the second fork of the river, played by Lauren Jade Szabo. They blend together in transformative healing until the river calls them back to complete their journey. 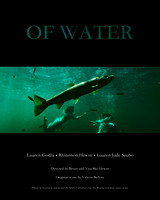